Having dogs is a common trend now a day. Hanging out with them, their loyalty and all those cuddles make anyone to feel to pet a dog. But we also observe common fights among street dogs and all that. They are very terrifying also so how to break a dog fight in situations like those? What one should do if he finds himself/herself surrounded by dogs in all their anger and rage and how to deal with it. In this article, we will learn about all the do’s and don’ts related to dealing and breaking up a dog fight.

If you have ever seen a fight between two dogs, you can estimate how terrifying it can be. Dogs can do serious damage not just to themselves but the humans as well if they don’t know “how to break up a dog fight?”. Even if you are the owner u may think that your dog will listen to your every command but that’s not the case. Doing a single wrong thing in breaking up a dog fight can lead you to the hospital. There are several reasons behind a dog fight which are:

Keeping in view the common causes of dog fights can help many to deal with them. First of all, you should try to prevent the fight as much as you can. For this, you have to be aware and active. Watch for the warning signs and try to calm them down as far as u can. The common anger signs of dogs are: “Greed” for food because they can become very possessive at these and show anger regarding these, “Growling” at something or some person, “Flattened ears” as they become furious their ears got flattened, they also become “Still” and “Stiff” staring at the thing about which they are getting angry.

What to do if you are alone?

First thing first, you should never indulge yourself physically to break a dog fight. Also never grab their collars to separate them. By this, you will put your arms and there are fair chances of getting bitten.

Also, don’t assume that if you are the dog’s owner then it won’t bite, it will. It’s a major contributor towards getting injured and also a major cause of dog injuries. The fact is that during the fight dog doesn’t care who is stopping him or saying something. Therefore, don’t underestimate your dog. Remember if your dog gets injured he will need you and there will be no point if you will get injured too.

Important things to do while you are alone

Using your body to break a dog fight

If two people are present at the plot the “wheelbarrow” method is the safest way to break up a dog fight. With this method, each person should grab the back legs of the fighting dogs and lift them off the ground and still holding their legs move backward to pull art the dogs. It is important to raise the back legs of the dogs high enough so that they can stand on their front legs. It will restrict them to make any movement and make it difficult for them to fight. Remember to isolate the dogs after a fright.

How to break up a dog fight in a park

If you have a dog it must go for a walk, engage with other fellow dogs and must socialize with others so, there are fare chances of it to get involved in a dispute or a fight. So if it gets into a fight what should you do? Especially if it’s in a park or a place which is much crowded. Remember that when dogs fight they bite and release. Therefore, our major concern is how to get out of the place, and reaching a safe place safe and sound. People usually grab head or throat area to make dogs apart but there are many chances, in this case, to get bitten or in the haste to keep yourself and the dog safe, people usually make themselves injured. The safest method to break a dog fight is to make them apart through the back area but they may be poor positioning and they may be moving very quickly so you may have to shove one of the dogs by placing your foot on the rib cage and pushing. It is safer instead of shoving with your hand and by bending. It may also allow you to grab the other dog as well if u don’t have any other person to help you out. 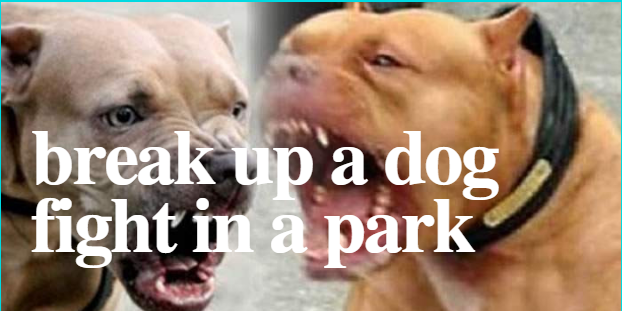 Prevent a dog fight with a spray

If you have dogs you must keep some kind of spray with you, so that it may be used during breaking a fight as a safety measure. You can use “water in a spray bottle” for the purpose. Spray the water at the head of the dog aiming specifically on the eyes and nose.

You can also use “citronella spray” or “vinegar spray” to protect yourselves. The reason to suggest citronella spray is that dogs dislike the smell very much. You can also use pepper spray or a fire extinguisher but they should be considered as last options because they can cause damage to dog’s eyes, skin, and mucous membranes. Not only this they can also cause irritation and damage to the people nearby.

After the fighting behavior

Once the fight is over you have to pay attention, that if still, your dog wants to fight or he immediately calms down? If he wants to fight more you have to train it more behavior-wise. In either case, you should understand the cause of why your dog got so furious so that you can avoid any similar situation. A majority of the fights can be avoided by noticing when one dog is tense around the other dog and calling them apart even before they fight and then rewarding your dog for good behavior. It will develop a psychological memory in your dog that every time he will get rewarded for showing excellent behavior.

Best 10 ways How to break up dog fight?

Yes, you can break-up a dog fight. Sometimes situations get worse. There are many ways and steps though. You can break-up the fight between dogs very easily by following these steps.

Best way to break up a dog fight?

“Remain calm and try to separate the dogs from their backs “.

How to break up a dog fight alone?

Stay calm, make noise, keep yourself apart and make sure everyone else is safe

How to break up a bad dog fight?

If both dogs are aggressive and are fighting intensely. Shove one of them while placing your feet on the rib cage or make a large noise such as a car horn to distract them.

How to break a dog fight at the dog park?

As a park is a crowded place you should remain active if your dog is getting serious or stiff due go any other dog or some person. Leave that place immediately. If your dog still got into a fight even before you know, keep the scene clear especially making sure kids are not around and then ask for somebody to help or do something on your own like using a distraction or by shoving them.

How to break up a dog fight with one person?

Both people should raise the hind legs of the dogs such that they are raised from the ground and make them apart.

How to break up a dog fight without getting hurt?

Make sure don’t use your arms in breaking up a dog fight, use your legs instead of with shoes on.

How to break up a dog fight with a pepper spray?

Veterinary specialists usually suggest Citronella spray because pepper spray is damaging to dog’s eyes and nose. You can use either of them anyhow

How to break up a dog fight safely?

Instead of being panic use your available resources wisely and do not bend and involve your hands in a fight. Use some metallic objects or shove hem away.

How to break up a dog fight without getting a bite?

You can throw a blanket over one dog, use a spray or shove them off using any metallic object or by your legs without getting them and yourself injured.

How to break up a dog fight?

No one likes fighting dogs, and though some people may think that it is very easy to break up a dog fight. However, the aggression, rage, and intensity that is taking place among two or more fighting dogs is very scary. If you meddle in without knowing what to do, the results can be very dangerous even fatal.

You should do the following methods if you want to break up a dog fight:

However, there are some dog fights which you cannot break up, and you have to access the situation very wisely. People usually end up having very serious injuries, crushed bones and infected bruises. Because when you meddle in the dogs can channel the attack towards you. In that cases you should not interfere and let them finish. 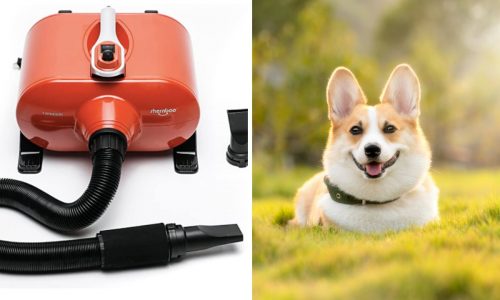